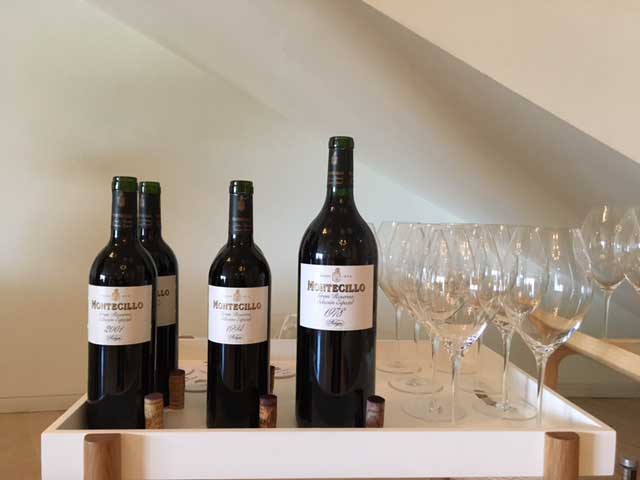 Now we have outlined the characteristics of the two most important professions within the world of wine (the oenologist and sommelier), let’s discuss what we could call a third pathway, that of wine tasters or experts.
Because when you go to a tasting at, for example, a wine shop or winery, the person hosting the session does not have to be one of the aforementioned professionals, nor do they require any formal qualifications.
We wanted to clear this up as very often people think that this person, due to the mere fact that they are hosting a tasting, has to have undergone a certain level of training.
If you have been to one you will understand what we are talking about.

For Montecillo, the important thing is that, within the rigour demanded by each wine, the tasting is entertaining and the client has a good time, leaving with two or three basic ideas that they can develop later.
We don’t see the sense in tastings that cover technical details that overwhelm the consumer and could even put them off wine culture.
Wine is a celebratory drink and this is how it should be treated and understood.
Saying this, we are going to explain what – academically speaking – a wine tasting should be like.
It is composed of three phases: visual, aromatic and gustatory.
The first two are optional but you should always finish with the third.

Angle the glass over a white serviette or piece of paper to be able to assess the colours against a plain background.  This is why it is very important to use a clear glass, with no colours or etching, the date of your wedding or something like that.
In this phase we need to differentiate between two parts: the core and the rim (the edge of the wine). You also need to check the wine’s clarity and brightness.
In red wines the darker red the centre and the more purple the rim, the younger the wine.  The more ruby red the centre and the more garnet or terracotta the rim, the older it is.
And the opposite applies to white wines, the lighter in colour they are, the younger and lighter in style the wine.  The more golden in colour, the more age and complexity it has.

We are now entering very subjective territory, as the definition of aromas is no more than a convention that depends a lot on individual memory and the development of our sense of smell, as not everyone is capable of differentiating between aromas in the same way.  The stages of this phase are:
Bringing the wine towards you, nice and close, introducing your nose without moving the glass and breathing in the aromas.
Next, do the same again but this time swirling the wine in the glass before smelling it, aerating it more, allowing you to better appreciate the nuances and be able to differentiate between them more clearly.

The fragrances will be mixed together in different proportions depending on various factors: the grape variety, age, type of barrel… here it is worth pointing out that the aromas are classified as primary, secondary and tertiary.
The primary aromas are those directly related to the grape variety, the orientation of the land, the soil composition and the climatology.  They are characteristic of young wines, with floral, fruit and spice notes appearing.
Secondary aromas depend on the types of yeasts and the conditions in which fermentations are carried out.  These aromas tend to be sweet and include those that are generated directly by fermentation (biscuit, brioche), lactic and amylic aromas (none other than banana, glue or varnish.)
Finally, tertiary aromas are aromas that have been acquired during the ageing of wine in barrels and its subsequent bottle ageing (therefore we won’t often find them in a young wine, unless it has been stored in bottle for several years.) They are where we can find more complexity.  The aromas that make wine unique. They can be vegetal (forest floor, truffle, mushroom), candied and dried fruit (red fruit, apricots, figs, nuts…), oak and resinous notes (eucalyptus, liquorice, cinnamon, pine…) or animal (leather, musk…)

The most complex stage, although the first thing to state is that without smell there is no taste, as you will have noticed when you have a cold, but you can also test the theory by blocking your nose, when you will see that you can no longer appreciate flavours.
Having said this, once you have the wine in your mouth breathe in some air so that it spreads all over your tongue.  Within this phase we have the following stages:

So now, you are ready to taste anywhere!