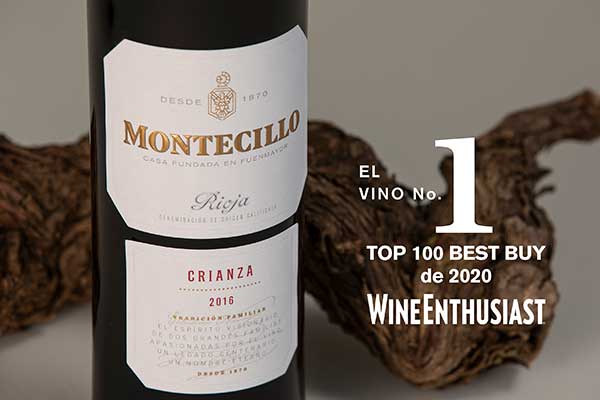 Wine Enthusiast has given a red wine from Bodegas Montecillo 90 points and placed it at the top of its 100 BEST BUYS list 2020.

Michael Schachner, the magazine’s editor and wine critic highlights the freshness of this wine from the 2016 vintage – a very good year – as well as the balance shown between fruit and oak and its authentic Rioja character.

We all want to discover and buy that fantastic bottle of wine that allows you to impress without investing a small fortune.  But with an ever-wider range on offer, how do you choose the right one? An innovative label can attract your attention, but we all know that it’s what is inside the bottle that really counts.  This is where the long-awaited list of TOP or BEST BUYS priced at $15 or less comes into play, with wines highlighted for offering the maximum price-quality ratio.   Every year, more than 1300 wines are tasted that achieve this coveted designation, an overwhelming amount. But luckily, the prestigious specialist magazine, Wine Enthusiast, makes it much easier for us by pulling together a list of the top 100 Best Buys, with this year’s number one position taken by our very own Montecillo Crianza 2016

This is not the first time that Bodegas Montecillo, the third oldest winery in Rioja, has won the acclaim of critics in North America.  Wine Enthusiast has once again awarded 90 points to our Montecillo Crianza 2016, ranking it in first place on its annual list of “Best Buys” and recommending it to its readers as a smart purchase.

The review was written by the editor and critic specialised in Spanish wine, Michael Schachner, who underlines the balance that the wine shows of red fruits lifted by complementary notes of oak, resulting in an updated profile of “authentic Rioja.”

Montecillo Crianza is made from Tempranillo and Garnacha grapes from vines located in Rioja Alta and spends 18 months in American oak barrels, followed by at least six months in bottle, protected from light and in complete silence.

This high score from Wine Enthusiast is added to those given by important publications such as Decanter, which not only gave this vintage 91 points but also featured it on the cover of the March 2020 edition, as offering  “The Best of Spain”. The same wine was also awarded a Gold Medal by the international Mundus Vini competition.