Carmelo Espinosa is in charge of the Bodegas Montecillo vineyards. Born in Rioja, his family’s passion for cultivating grapes and ageing wines is a legacy that has been passed down from father to son. But don’t be fooled: Carmelo is much more than a traditionalist. He represents the new generation that keeps the story alive by preparing for the future. He studied Viticulture and Oenology at the University of Rioja and UNED, after getting a degree in Biology from the University of Malaga. 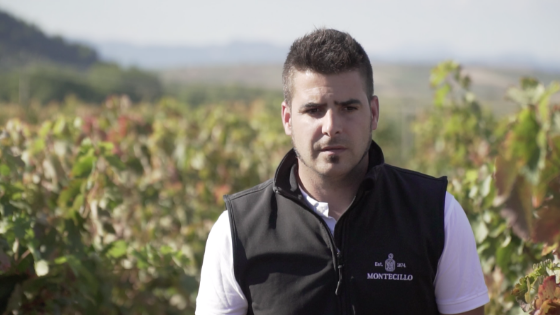 From his time spent studying in the South of Spain, he has particularly found memories of the year 2001: “That was the year that I worked in the Doñana National Park with lynxes.” To protect this endangered species it is necessary to check the population constantly. This is why Carmelo started to study and put geolocalizations into practice. “Making triangulations of lynxes to locate them.” Knowledge that he now applies to viticulture.

He currently supervises 1,172 parcels spread across 23 towns in the Rioja Alta. “It’s impossible to remember them all.” Thanks to his experience in Doñana, he presented Bodegas Montecillo with a geolocalisation project, and the winery, ever keen to invest in innovation, incorporated this technology to optimize the efficiency of their production processes.  Thanks to the implementation of this system, he can now use a tablet to access all the data about the 400 hectares and check on every phase of growth.

Although his love of nature spurred him on to be a scientific observer of whales in the world’s oceans, a diving instructor in Thailand and a sea lion and dolphin trainer, Carmelo says this is why he continues to have his fondest memories of what he learnt with the lynxes in Doñana: “The year 2001 was very special for me. Because since then it seems I was destined to work in Bodegas Montecillo.”